Here you will find the names of some people of Vignacourt, called "Vignacouriers". They distinguished themselves in their civil and military actions, and or job.

Religious Sister of "Providence of Rouen", she was born in Linzeux in 1839 in Pas-de-Calais and died on November 13, 1898 in Vignacourt. This religious community settled in the city of Rouen around 1677, its existence was already mentioned in 1666.
For the Vignacourt Girls' school, she was appointed Director from January 16, 1878.

Doctor as of 1871, at Vignacourt in 1907. Native from Cardonette village, close to Allonville.... . He became friends with a Parisian photographer, a photograph expert...

Alcide was a farmer but he served as mayor during the Second World War. Jules Boutard was Town Councillor during this period.

Born in Vignacourt in 1867, he learned the trade of weaver. He was engaged in the 5th dragon regiment in 1888. During the first world war, he was incorporated in aeronautics ... Army officer, Military medal in 1907, knight of the Legion of Honor - 1916.

He was mayor of Vignacourt during the war of 1870. He then served as substitute justice of the peace, for the township of Picquigny.

Pierre DABOVAL is born at Vignacourt in 1752. He will become a renowned fencing instructor at the military school of Brienne in the Champagne region, from 1776 to 1793.

He crossed swords with Napoleon-Bonaparte. In fact, he was his master of arms. Later he became a policeman in the Aube region. He died in Nogent-sur-Seine, in the southeast of the Paris region, on February 17, 1834.

Doctor, surgeon specialist midwife. He was born in 1767 à Heilly, village located at 18 miles from Vignacourt. He died in 1846. He followed surgeon courses at Paris from 1782 to 1789. He lived with his uncle Baudelocque, also born at Heilly.

Freshly graduated, he moved to Vignacourt, but not for a long time, because he was in competition with another surgeon already established in the village. Close to the French revolution, he entered the army as an assistant major in the 3rd Bn of the Somme region; then in 1794, he became Major surgeon. After this military part, he moved to Albert city in 1795 (20 mi from Vignacourt). His marriage allowed him to embed aristocratic families. He evolved rapidly to various positions, from St-Charles Hospital to Hôtel-Dieu Hospital. Until to work for the royal family, for the Duchesse Dubarry. He was appointed Knight of the Legion the 30 September 1820. 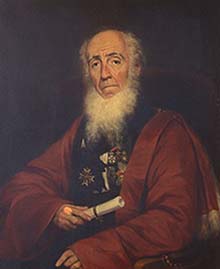 Portrait of Louis-Charles Deneux of the Academy of Medicine
with the authorization of the Interuniversity Library of Health, www.biusante.parisdescartes.fr

He was born in 1711 in Vignacourt, he was a rider of the Maréchaussée de Picardie. This military troop of horsemen based in Amiens a few steps from the citadel included some brigades located throughout the regional territory ...

Native from Brittany, Alexandre settled in Vignacourt before the first world war to practice the profession of a doctor. People had great respect for him. He lived near the pond. He married in August 1916.

He died at the age of 46 years old trying to save a child from drowning. He threw himself into the pond but he was a victim of a stroke. The child was rescued by his employee:
Mrs Georgette HOUDRON.

He was born in May 1791 to a modest family. His father, Theodore Pierre Valentin was yarn merchant manufacturer. His mother's name was Rosalie DUBUC. His maternal grandfather, born near Le Tréport, was a forest ranger in Vinacourt ...

He was then in charge of Crown buildings, this function allowed him to to interacting with architects, craftsmen. It is therefore natural that he became interested in the buildings of his village, helping to rebuild the church. He also funded the expansion of the girls' school.

He lived in Paris and he had no children. It was therefore the whole of the municipality which benefited from some advantages, but above all from its work. The word "laborious" is the first word carved on the column erected in the central aisle of the cemetery. He died in May 1873 and wanted to be buried with his family.

Parish priest of Vignacourt during the first world war from 1906 to 1920. He took over from Abbe Rousselle, pastor of the church from 1899 until 1906, the year of death.

Abbe LECLERCQ was staying with his sister Marie Leclercq in the village. Their parents lived near the Amiens cathedral and belfry originally.

Marie-Madeleine was born in 1803 in our village, she as worked as a midwife for more than 35 years. She received a Prize of Honors in 1865, as demonstrated by the silver case below, engraved on this occasion.

In this year 2017, more than 150 years later, this small object is located in the United Kingdom held by Mr. CAMERON an antique silver from London.

Born in 1706 in Vignacourt and died in Amiens in 1783. He was a rider of the Picardy Marechaussee. Horseman for more than 40 years.

He worked as a pharmacist. The pharmacy also frequented by allied soldiers during the First World War, was located near the city Hall. I think that one could imagine in these places, beautiful woodwork, like that of the first apothecaries, with shelves decorated with some glazed pottery.

In 1929, at the age of 80, he still managed his pharmacy. He had celebrated that year too, his golden wedding anniversary with Félicie surrounded by his children and grandchildren.

Henri was veterinary in our village, graduated from the national school of veterinary after many years of study. He obtained the medal for agricultural merit in 1909 and he was the author of several works.

He began his career as a veterinary assistant in 1881, appointed by decree of the President, on the proposal of the Minister of War integrated into the 10th regiment of Hussars.

A native of Halloy-les-Pernois village, he was roadmender of Vignacourt. He saved M. Florent RHETORE from drowning one evening. The miller, aged over 70, wanted to collect water but he slipped into the pond in Follemprise street. It was a difficult rescue by a freezing cold (February 1887).

He helped 2 young boys, who had disappeared under the ice, in the middle of the waterhole. He was roadmender of Vignacourt, (communal employee) (January 1886).

He was born in the Nord Pas-de-Calais region. He was a Doctor, his father was telegraph operator. He moved to Vignacourt the 31st of October 1907. His house was located near the church (street Godard Dubuc).

He was located previously in the neighboring village of Flesselles (the birthplace of his wife). The Dr. Rinuy street is dedicated to his memory over there. (4 miles from Vignacourt). He was very appreciated in both municipalities.

He was born in Mametz, a former village in the Somme, this town has not disappeared. Since 2019, it is part of the municipality of Carnoy-Mametz.
He became parish priest of Vignacourt in 1899, he is buried in our municipal cemetery with
the Latin mention "requiescat in pace".

Louis was born in 1886. He grew up in a family of farmers. He was interested in mechanics with the management of a fleet of agricultural machinery and repair of Peugeot cycles. Louis Thuillier had a passion for photography.

From 1915 to 1920 Louis and Antoinette Thuillier will make several soldiers' photographies with different nationalities and local people. Valuable evidence for these soldiers and our village. The collection is considered by specialists as a major discovery in the history of the first world war.

Invest in a good camera was not enough to make beautiful photos. Louis and Antoinette had real photographer's skills, a way to see things, to apprehend the staging. They have invested for that in a backdrop...

He was Mayor of Vignacourt during the first world war and Senator of the Somme from 1920 until his death in March 1926. He managed several factories including the French Society of fishing nets created by his father, in which many inhabitants of Vignacourt have worked.

As a senator from our region, he presided over the inauguration ceremonies of the war memorials in the military cemetery and the Vignacourt communal cemetery in 1921 with the mayor. Furthermore, he has also served as chair of other ceremonies such as that which took place in the neighboring village of Picquigny.

He was born at Fourdrinoy (village 5 mi from Vignacourt) in 1843.

He wife was native from Vignacourt. He worked as a pharmacist at Amiens, from 1870 to 1892, place St Martin, near the Cathedral of Amiens. He was also a professor appreciated, professor to the school of Medicine and Pharmacy of Amiens. He submitted a thesis in pharmacy in Paris 1869.

Afterwards, he left Amiens for Vignacourt (street "du sac", near the pond). Dr BOURY was present at his funeral in the Vignacourt's church, end 1909.